The augmented reality application for your games 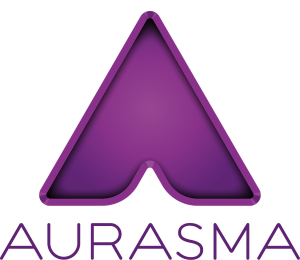 Aurasma is a smartphnone and tablet (iOS and Android) application that allows to access, through your camera, to a series of extra content (video, sound, images and 3D models) and to a augmented reality effects.

What is augmented reality?

Augmented reality (AR) means a set of information applied “over” to reality. In this case for example it concern videos that we can see pasted on the volumes covers.  Focus with Aurasma on Dogs in the Vineyard’s cover and you’ll see Vincent Baker explain why you should try his creation. Otherwise it’s possible listen to a professional actor who reads the text of Monster Hearts’ sheets.

All the covers of Narrattiva games marked with the Aurasma logo activate multimedia content!

Where can I find Aurasma?

Application is downloadable for free from AppleStore or GooglePlay. Once installed, simply subscribe to “Narrativa” channel to have access to all contents. Below you will find a practical guide to install and use this application.

First open the store on your smartphone. No matter what, Aurasma is available for free on all major store: AppleStore, GooglePlay and also customized versions from the various players.

In fact, as you can see in the example image, I am using the store of another Italian operator.

Search for “aurasma” in the store.

Usually the first result is the right one. Both the application and the company that produces it are called Aurasma and are characterized by the A-shaped logo that you can see at the beginning of this page.

After performing the installation, you find the application icon on your phone.

The icon is always the Aurasma logo.

Start the application. After a brief loading screen the camera of your smartphone will automatically activate.

On the left you can see a smartphone camera frame the “Apocalypse World” game cover.

Touch the Aurasma logo at the bottom center of the screen to continue.

At this point you have the application menù open. Touch the symbol hand lens-shaped in the bottom bar to access the search function.

From here you have the possibility to search within the Aurasma system. To continue type “narrattiva” in the search bar and then tap the Done button.

What is an Aura?

An aura is an augmented reality information that is projected over the image collected by the smartphone camera.

What is a Channel?

Aurasma is a free application used for hundreds of different purposes by hundreds of people, companies or associations.

To make it easily traceable only auras that interest us, system asks us to subscribe to a channel, a virtual room where Auras we want to see are stored. For example, those of Narrattiva.

As you can see in the expample by side, Narrattiva owns several channels: one for Italian Auras, one for English Auras, one for Super Auras, etc etc.

What is a Super Aura?

A Super Aura is an aura like other but which receives an incentive by Aurasma. In case of important events Super Auras are visible to anyone with the Aurasma application installed on his smartphone, without need to subscribe to some channel.

Narrattiva had a Super Aura active (the one you can see on the Bacchanalia box) throughout the duration of the Essen Spiele fair 2012, as a promotional tool for the game’s release.

When you sign up for free at Narrattiva channel on Aurasma application, you also have the chance to touch the “Like” button, and make anyone who uses the application know that you like our games and the augmented reality technology implementations that we have added there.

More “Like” we receive and more we will be pushed to increase the use of Augmented Reality in our next games.

When the button becomes darker and shows “Following” means that you are officially registered at Narrattiva channel.

Search the Aurasma logo on our games and try now Augmented Reality.

This is a list of some of our games in which you can find Augmented Reality contents: